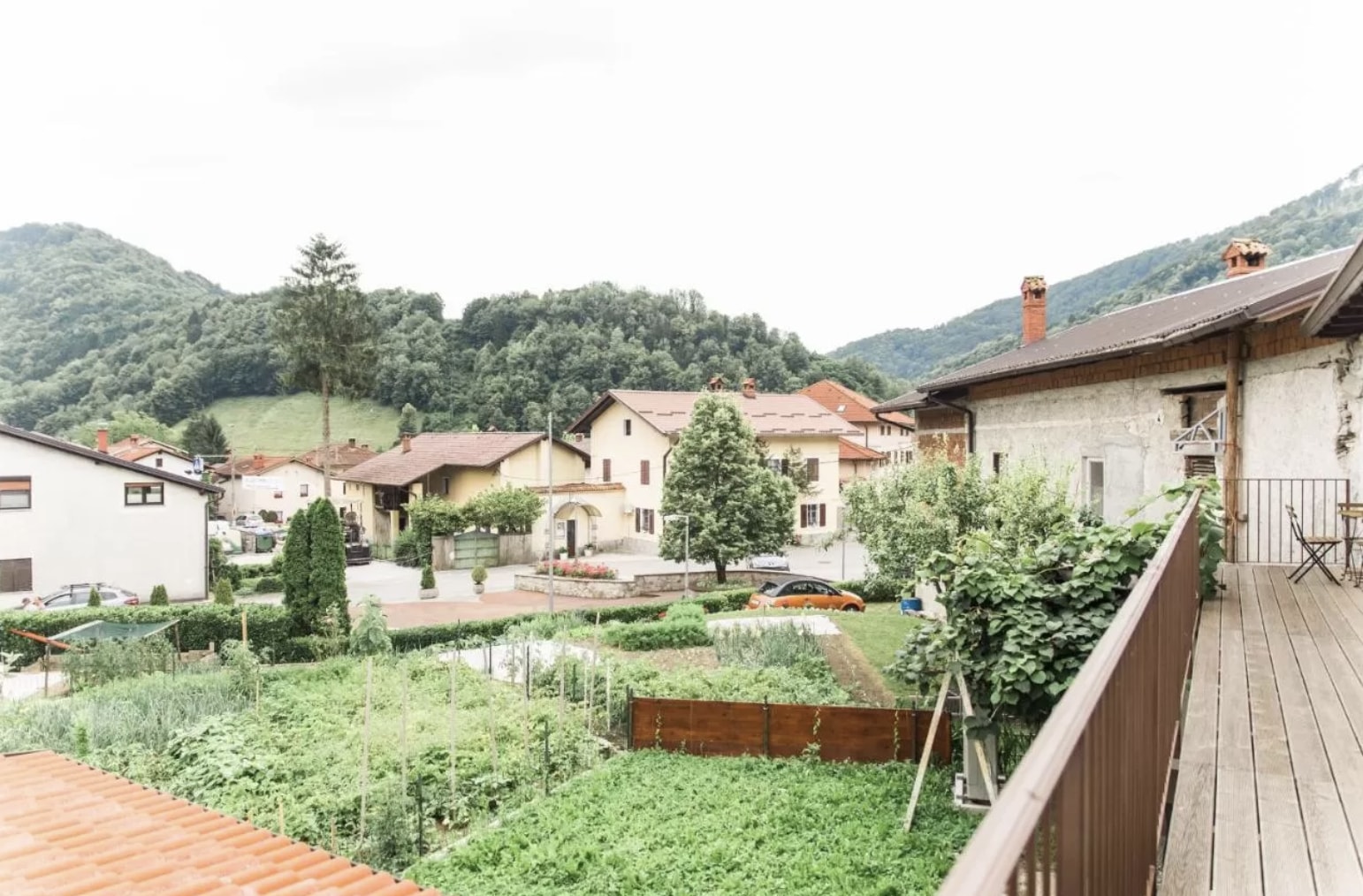 YOUNG LIVING FLAT WITH
GARDEN IN AN IDEAL LOCATION

From the soaring peaks of the Julian Alps and the subterranean magic of Postojna and Škocjan caves, to the sparkling emerald-green lakes and rivers and the short but sweet coastline along the Adriatic Sea, tiny Slovenia really does have it all. An incredible mixture of climates brings warm Mediterranean breezes up to the foothills of the Alps, where it can snow even in summer. And with more than half of its total surface still covered in forest, Slovenia does more than simply claim it's 'green', it really is one of the greenest countries on earth.

Slovenia is first and foremost an outdoor destination. Local people favour active holidays, and you’ll be invited – even expected – to join in. The list of activities on offer is endless, with the most popular pursuits being skiing, walking and hiking in the mountains, and increasingly, cycling. Fast rivers like the Soča cry out to be rafted and there are ample chances to try out more niche activities like horse riding, ballooning, caving and canyoning. If all this sounds a bit much, you can always decamp to the coast and sunbathe on the Adriatic.

You might be forgiven for thinking that anything of beauty in this greenest of green lands is, well, all natural. But it isn't necessarily so. Where man intrudes is often to good effect, such as at Lake Bled, where a tiny baroque chapel on a picturesque island and a dramatic castle looming above complete a harmonious whole. The architecture is wonderfully varied: from the Venetian harbour towns of the coast and the rustic Hungarian-style farmhouses of Prekmurje to the Gothic churches of the Julian Alps and the art nouveau splendours of Ljubljana. The museums are rich and the culture vibrant.

One of the best places to visit in Slovenia is its capital, Ljubljana. Although Ljubljana is much smaller than most European capitals, it has a unique charm that makes it worth a visit. A major attraction in the city is Tromostovje, also known as the Triple Bridge, where three picturesque bridges span the river right next to one another.

Serving as a gateway to the Triglav National park is Lake Bled, a scenic body of water surrounded by the Julian Alps. The emerald green lake isn’t large, and it is possible to walk the perimeter in a single afternoon. What makes the destination so appealing is the small island in the middle of the lake, which is home to a 17th century church.

If you want to get outdoors and explore some of the amazing natural scenery in Slovenia, then Triglav National Park is the ideal spot to visit. Most of the park is made up of the Julian Alps, with highlights in the region including the towering peak of Mount Triglav itself as well as the calm waters of Lake Bohinj.

Postojna is a relatively small town in Southwest Slovenia, but it is a must-see destination for travelers drawn to unique attractions and natural scenery. Postojna is known for its extensive cave system, which boasts a staggering 20 km (13 miles) of chambers, hallways and galleries, some of which have ceilings nearly 50 meters (150 feet) high.

On the tip of Southwestern Slovenia, and on the coast of the Adriatic Sea, is the resort hotspot called Piran. The destination is reminiscent of Italy, which makes sense since it was actually part of the Venetian Empire for more than five centuries. Piran is small in size, but it is quaint, historic and scenic. History buffs might want to explore landmarks like the main square called Tartinijev trg, the oldest building in the city called the Venetian House and the Church of St. George. You can also walk right on top of the city walls or hop off one of the piers for a refreshing swim in the Adriatic.

On the banks of the Drava River is the city of Ptuj, a destination in Eastern Slovenia with an impressive collection of historic architecture. Ptuj is widely regarded as one of the oldest cities in the nation, and it has been important in the local culture since the Stone Age.

One of the oldest cities in all of Slovenia is Celje, a small city perched on the banks of the Savinja River. The biggest attraction in the city is the enormous castle, which was erected in the 14th century and now looks down over the city from its hilltop location. The best way to spend a day in Celje is to walk through Old Celje, the historic downtown where buildings date back to medieval times and you can stroll along cobblestone roads, dine at traditional eateries and admire the traditional architecture throughout the city.

Popular for winter sports enthusiasts is the destination of Kranjska Gora, located in the northwest of Slovenia. During the winter, Kranjska Gora is busy with visitors who ski and snowboard in the resort of Vitranc, taking advantage of the frequent snowfall and the steep trails.

In addition to the daily flights to many European cities, there are two low-cost flight providers flying from the main Slovenian international airport Jože Pučnik Ljubljana. They are EasyJet and Wizz Air, flying to London and Brussels. You can also fly to one of the foreign airports in the near vicinity, and access Slovenia from there by bus, train or rental car.

Buses run to Slovenia from many European cities. In Slovenia, you can also get to most of the towns and the countryside by bus. If they run along local roads, the drivers can stop at a bus stop in any settlement. You can buy a bus ticket directly from the bus driver, while at major bus stops you can also buy a bus ticket for a specific date.

Most of the cars enter Slovenia by motorways, which is also the easiest way to travel around the country. It is easy to travel the Slovenian roads by car, since they are well and clearly signposted. Although some local roads are narrow and winding, a drive along them is nevertheless pleasant and varied. For driving on motorways, it is mandatory for you to have a vignette.

Trains to Slovenia run daily from many European cities. If travelling by train, it is also possible to ride in a sleeping car. There are only the trains of Slovenian Railways running around Slovenia, with all the timetables and price lists published on the web pages. You can buy a ticket at every railway station as well as on the train. Slovenian trains stick to the timetables.