a place and a feeling not quite like any other 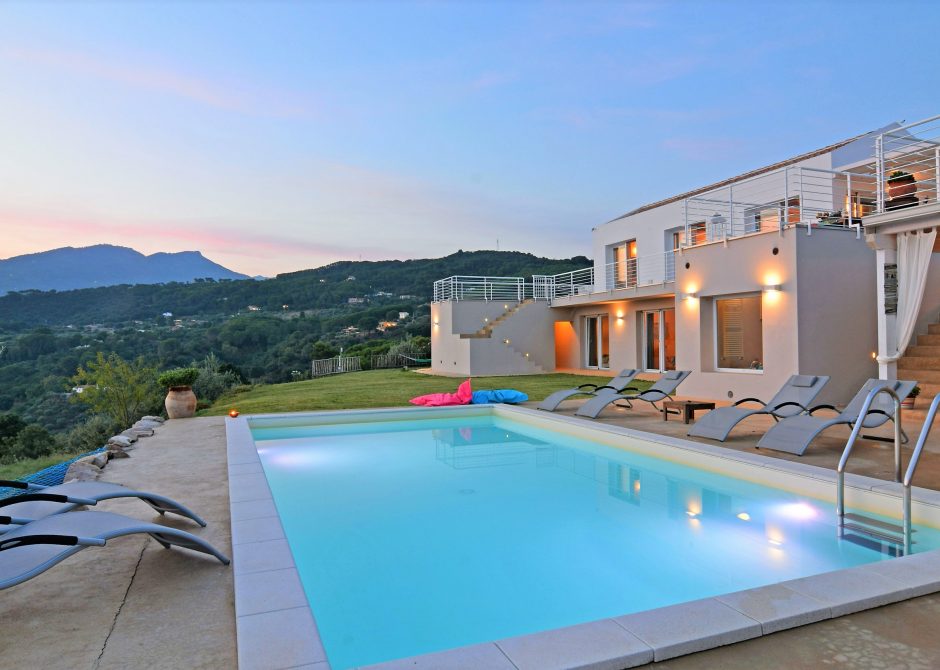 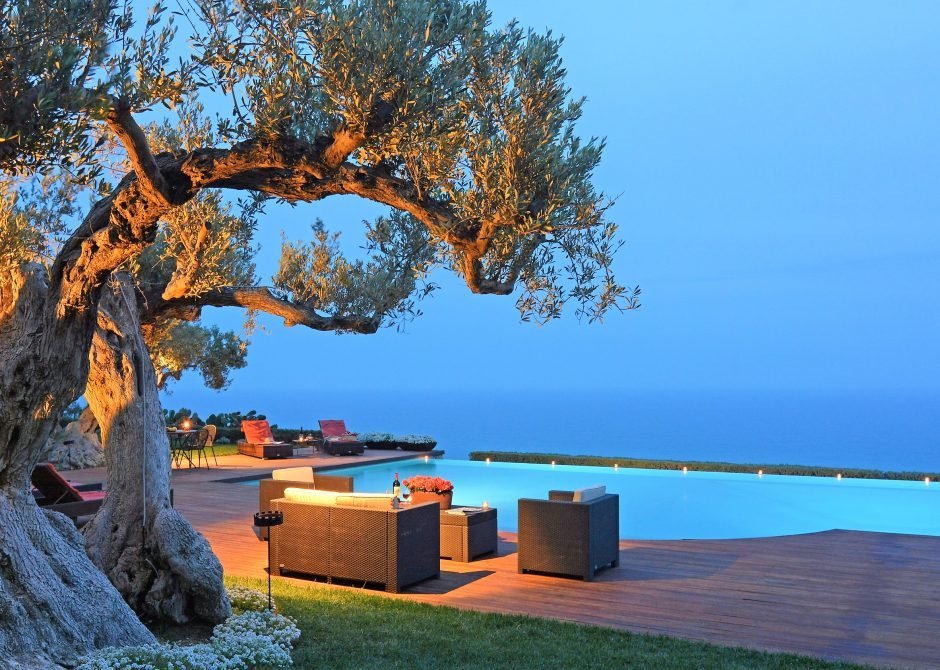 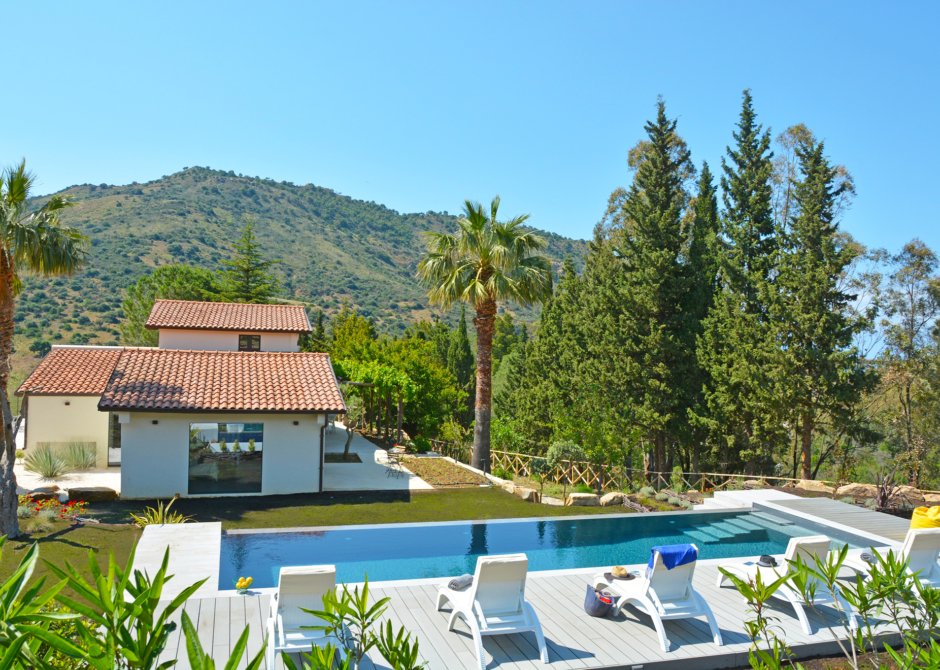 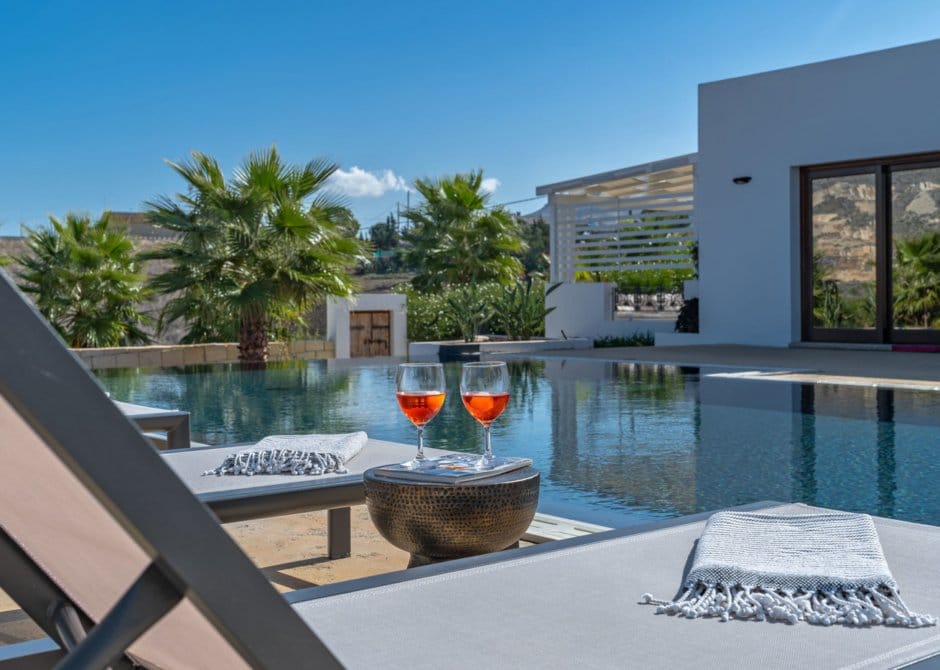 DAZZLING VILLA WITH POOL
NESTLED IN A LUSH GARDEN 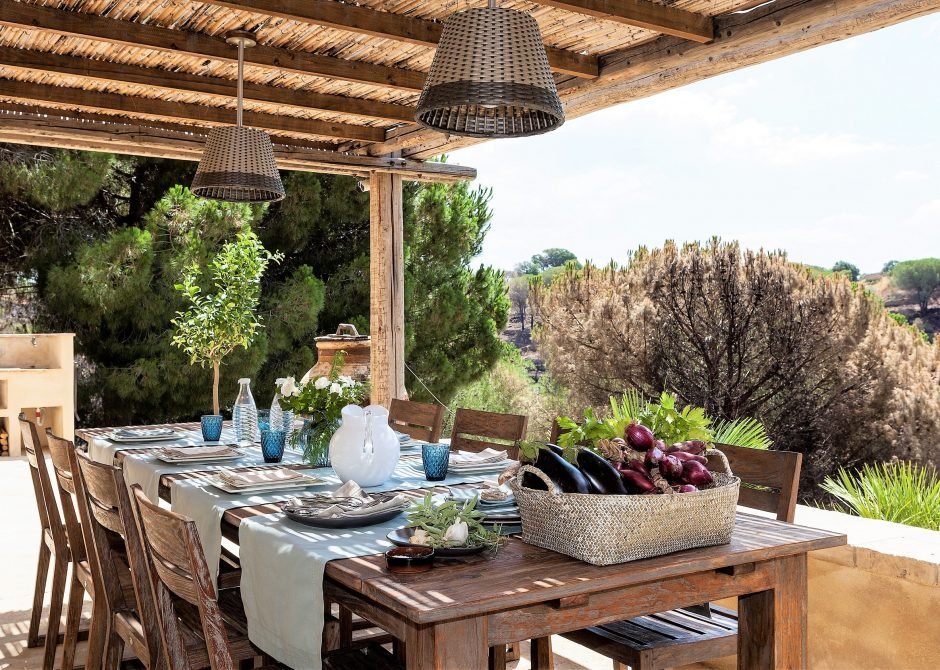 CHARMING VILLA SET ON A
HILLSIDE IN SOUTH-EAST SICILY 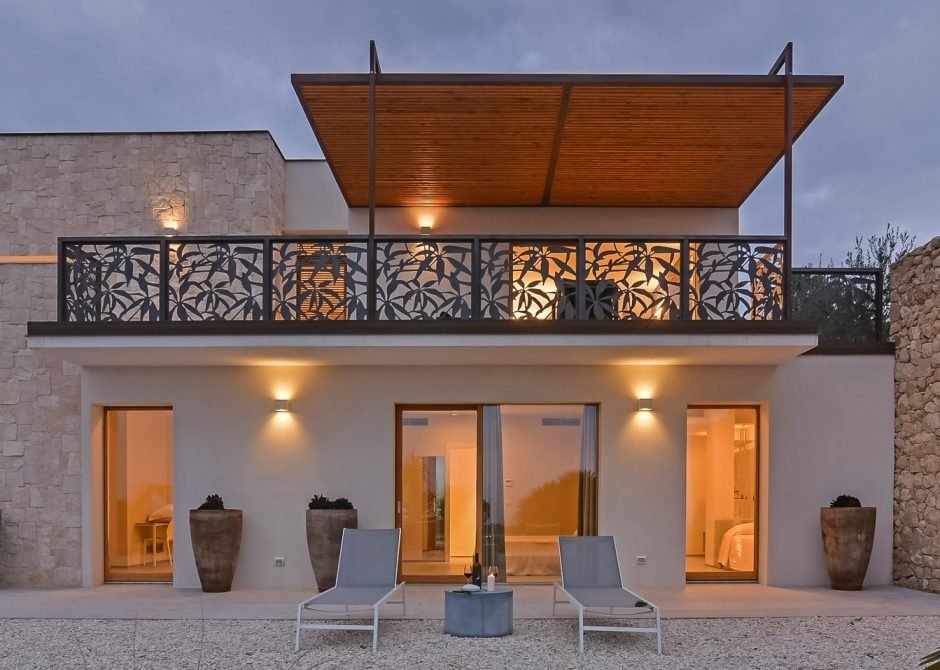 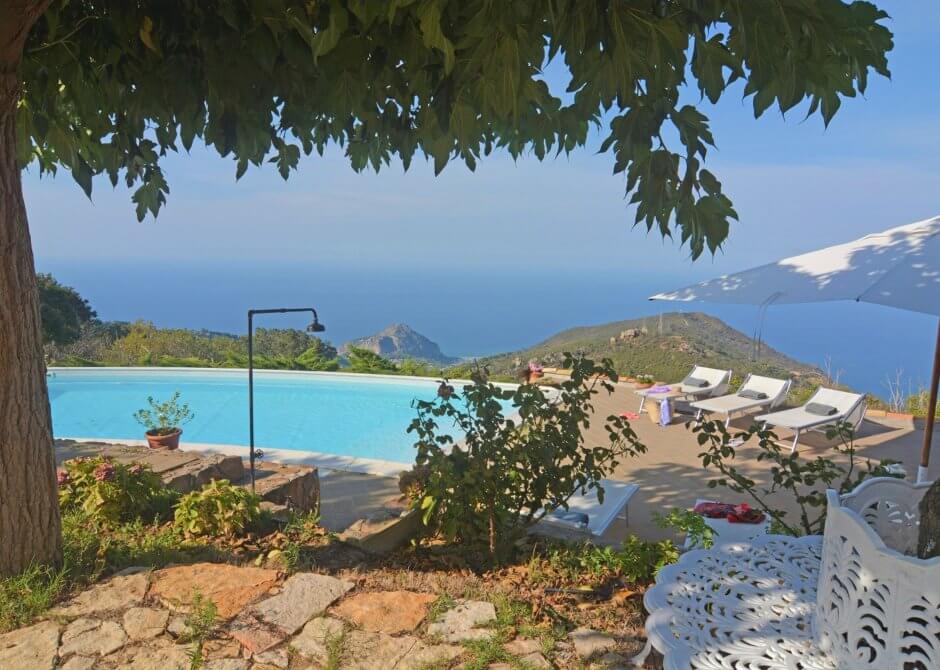 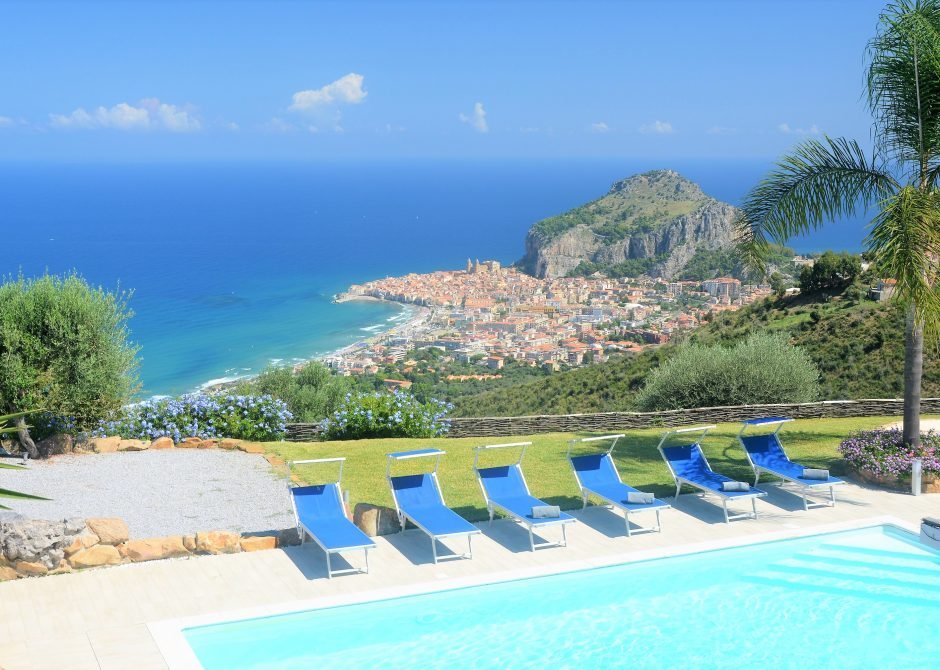 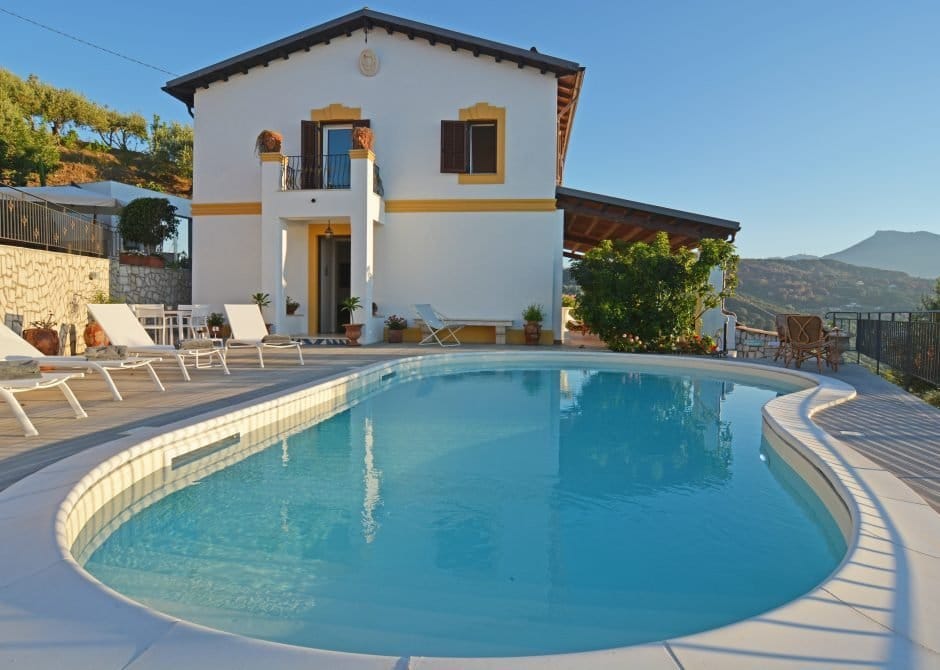 SPLENDID VILLA SET ON A VERDANT
HILLSIDE ABOVE THE BEACH 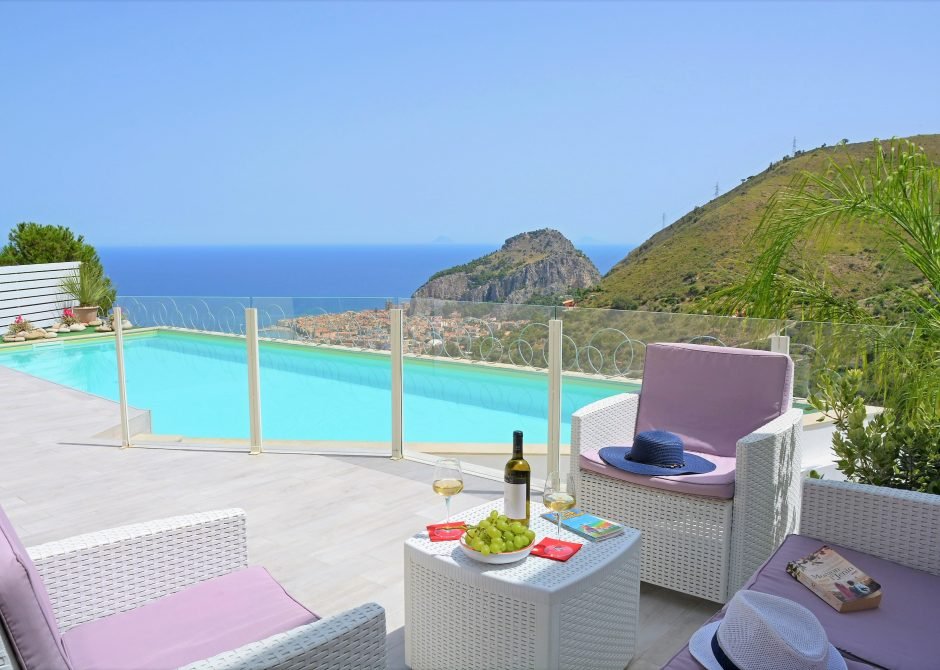 MAGNIFICENT VILLA WITH A
BREATHTAKING VIEW OF CEFALU 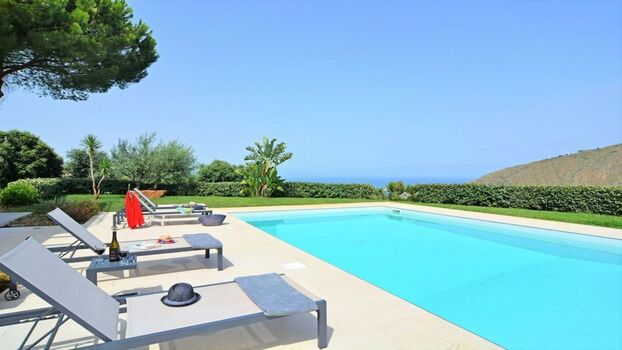 Sicily, Italian Sicilia, island, southern Italy, the largest and one of the most densely populated islands in the Mediterranean Sea. Together with the Egadi, Lipari, Pelagie, and Panteleria islands, Sicily forms an autonomous region of Italy. It lies about 100 miles (160 km) northeast of Tunisia (northern Africa). The island is separated from the mainland by the Strait of Messina (2 miles [3 km] wide in the north and 10 miles [16 km] wide in the South). The capital is Palermo.

Seductively beautiful and perfectly placed in the heart of the Mediterranean, Sicily has been luring passersby since the time of legends. The land of the Cyclops has been praised by poets from Homer to Virgil and prized by the many ancient cultures – Phoenicians, Carthaginians, Elymians, Romans and Greeks – whose bones lie buried here. Whether in the classical perfection of Agrigento's Concordia temple, the monumental rubble of Selinunte's columns or the rare grace of a dancing satyr statue rescued from Mazara del Vallo's watery depths, reminders of bygone civilisations are everywhere.

A delectable layer-cake of culinary influences, Sicily's ancient cuisine continues to rely on a few key island-grown ingredients: shellfish and citrus, tuna and swordfish, pistachios, almonds and ricotta. Talk to the septuagenarian chef at a Catania restaurant and she'll confide that she still uses her grandmother's recipe for pasta alla Norma, joyfully sharing the poetic imagery that links it to Mt Etna: the tomatoes are lava; the eggplant, cinders; the basil, leafy greenery; the ricotta, snow. Modern chefs may play with the details, but Sicily's timeless recipes – from the simplest cannolo to the most exquisite fish couscous – live on.

The Valley of Temples in Agrigento

The large complex of temples and tombs in Agrigento dates as far back as 500 BC and includes Sicily's best preserved Doric temple-Tempio di Concordia-one of the most perfect to survive anywhere. Along with it in the eastern group is the Tempio di Juno Lacinia, almost as large, and in the western group is Temple of the Olympian Zeus, the largest of them at 40 meters but toppled by an earthquake. The circular Doric Tempio di Heracles, also in the western group, was destroyed by the Carthaginians and rebuilt by the Romans, only to be partially destroyed in an earthquake. The entire group is listed as a UNESCO World Heritage Site.

The Cathedral of Monreale

The cathedral of Monreale reflects at once the politics, religion, and artistic heights of Sicily under the Normans. And in doing so, it also achieved a place in the art history of Europe, all the more remarkable because it remains today almost exactly as it was built in the 1100s. The cathedral's architecture represents the move away from Eastern Byzantine forms, but its decoration with dazzling mosaics-considered the church's magnificent highlight-keep it firmly in the Byzantine traditions. They cover every available surface, in intricate illustrations of Biblical text and themes rendered in vibrant colors and with exceptional artistic virtuosity.

Two of Palermo's three major churches, the Cappella Palatina and Santa Maria dell'Ammiraglio, better known as La Martorana, are famed for their mosaics. Those in the chancel of the Normans' court church, Cappella Palatina, are thought to be from 1143 and the mosaic of Christ between Peter and Paul from about 1350. Other highlights of the church are the Arabic stalactite ceiling, the pulpit on carved and inlaid pillars, and the tall candelabra. La Martorana's beautiful mosaics are also from the 12th century on a gold ground and are the oldest of their kind in Sicily. The image of Christ is the centerpiece, and elsewhere in the vaulting, dome, apses, and narthex are scenes from the New Testament.

One of the largest and most significant of Sicily's ancient sites, Selinunte has eight Greek temples dating as far back as the fifth century BC, plus the nearby Temple of Demeter. The most important are those known as the Eastern Group, labeled by letter: Temple G for its impressive size and Temple E for its architectural grandeur, considered the highpoint of the Classical period. Temple G, now in ruin, was among the largest of all Greek temples. In a separate section is the large Acropolis surrounded by defensive walls, some dating from the seventh century BC. Temple C is the largest and oldest, from about 550 BC, and sits on the highest ground.

Etna is an enigma; even its height is never certain as it changes with each new eruption. But at more than 3,000 meters, it rules the skyline with its often-smoking cone. Volcanic vents, fumaroles, hot springs, and lava flows add to its changing landscape, much of which you can explore (although not too close to the central crater) on foot or in all-terrain vehicles designed for traction in the volcanic surface. Roads lead to the base of cable cars, which will take you to the 2,500-meter point, an easy day trip from Catania or Taormina. In the winter, you can ski near the summit.

A 12th-century landslide buried this sprawling Roman villa outside Enna, thus preserving it almost intact to be discovered and excavated eight centuries later. One of the best-preserved villas anywhere in the Roman Empire, it still has most of the original decoration. In the 50 rooms so far excavated are more than 3,500 square meters of mosaic floors with detailed scenes from mythology and contemporary life, including hunting wild animals for use in gladiatorial combat. The thermal baths with their colonnaded courtyard and fountain are especially beautiful. The villa is a UNESCO World Heritage Site.

One of the largest theaters in the ancient Greek Empire is a good reason, but not the only one, to visit the archaeological park in Syracuse. The view of the excavations as you approach along Viale Rizzo will give you an idea of their extent, which includes both the Greek Theater and a large Roman Amphitheater. The massive Altar of Hiero II dates from the third century BC, a century later than the 15,000-spectator Greek Theater. The Roman Amphitheater is from the third century AD and is partly hewn from the bedrock.

Fly to Sicily by arriving either at Catania Airport (CTA) or Palermo Airport (PMO). Which airport to use depends both on the convenience of the flight and of the destination airport, because Palermo is in eastern Sicily and Catania is in the western part of the island.

Book passage on an Intercity (IC) or Eurostar (ES) train. Although Sicily is not connected to the Italian mainland by bridge, trains are ferried from Villa San Giovanni in Calabria, the toe of Italy's boot, to Sicily. Passengers do not even need to disembark from the train for the roughly one-hour passage.

Ride a bus or drive a rental car to Sicily. Bus companies like Interbus run routes from major Italian cities to Sicily, and drivers can depart from virtually anywhere in Italy. Car ferries depart from Villa San Giovanni, which makes it a transit point in common for cars and buses, as well as trains.

Book passage on a passenger sea ferry from elsewhere in Italy. In Italy, these ferries depart from Cagliari, Genoa, Livorno and Naples. International ferries travel to Sicily from Malta and Tunisia. Most ferries arrive in Palermo, but some go to Syracuse, as well as smaller port towns on the island.