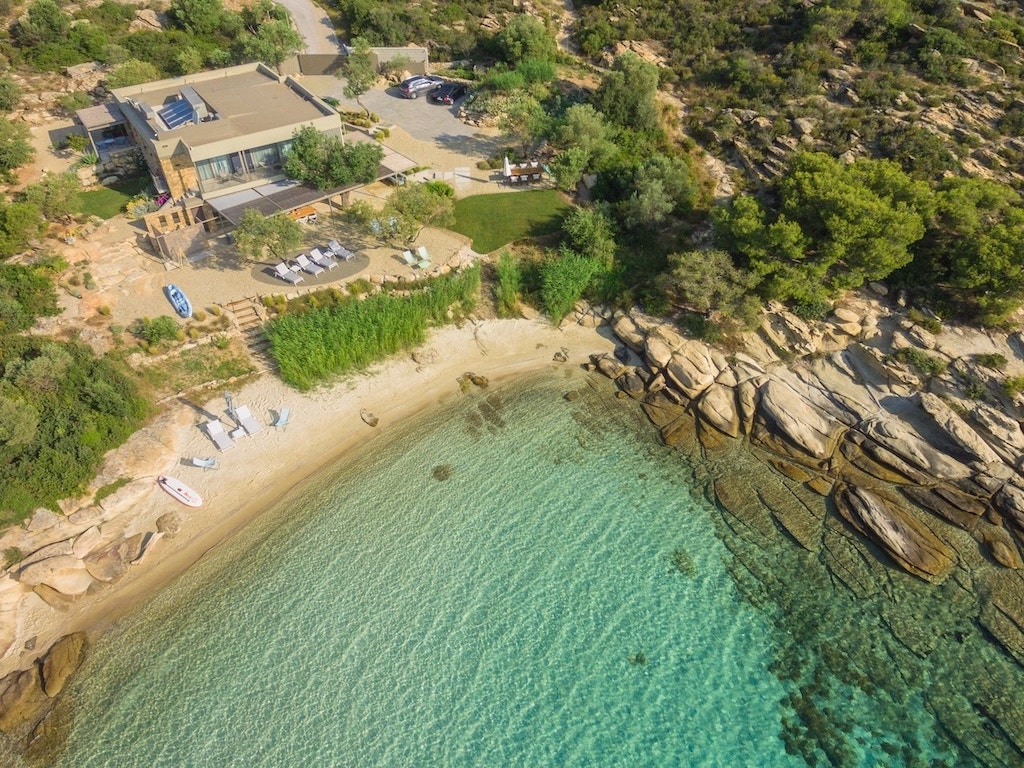 They say that nowhere in Greece can boast beaches like those of Halkidiki. The region has the perfect combination of that distinctive Greek light, unspoiled landscapes, colours and fragrances. And the glorious natural setting is complemented by the rich culinary fare of the region and the living religious traditions of its people, manifested in a host of feast days and other ceremonies and rituals.

Shaped like Poseidon’s trident, Halkidiki’s prongs jut out into the Aegean Sea. Lush green forests extend all the way to the beachfront where reflections of golden sunlight add sparkling hues to turquoise waters. Long stretches of beautiful ever-changing shoreline, unique archaeological sites, world-renowned Christian monuments, lesser-known natural wonders and man-made masterpieces have all helped shape the region’s diverse identity, made even more interesting by the rich local culinary and cultural heritage. On this fascinating canvas of blue and green, you will find large hotels built to the highest standards, mostly on cosmopolitan Kassandra, the westernmost peninsula; traditional seafront guesthouses and marinas along Sithonia coastline (middle peninsula); and archaeological sites such as Ancient Olynthos and Stageira, the birthplace of Aristotle. Last but not least, Mount Athos: the easternmost peninsula is home to a unique Christian Orthodox monastic state, inscribed on UNESCO’S World Heritage List. It is a millennium-old living proof of the Byzantine culture, surrounded by pristine nature. Please note that Mt. Athos accepts only male visitors.

Halkidiki is home to pockets of paradise and those of you who love wooded mountains will no doubt find their own paradise here. Follow the hiking trails or go mountain biking through forests of pine, oak, fir and chestnut. Enjoy the invigorating feel of the clean mountain air and quench your thirst in the cool waters of gurgling streams and springs hidden in the vegetation. For those of you in search of the perfect holiday destination facing the Aegean Sea waters, Halkidiki is a great option; and if you’re after an adrenaline rush, you will enjoy activities such as windsurfing, kitesurfing, scuba diving, water skiing etc, on Kassandra and Sithonia. In the summer, there are some great art festivals that take place in Halkidiki. Enjoy the music and outdoor theatre performances as well as other performing arts events.

Most of the coastal villages in Halkidiki are organized offering visitors high quality travel services. In Halkidiki there are a lot of luxury resorts, hotels, villas and rooms for every taste. The first peninsula of Halkidiki, Kassandra, is cosmopolitan with a lot of villages which in summer period are full of travelers. Sithonia, the second peninsula of Halkidiki, offers a different experience closer to nature lovers with a lot of beautiful beaches.

During the summer, Kallithea is the most popular village in Halkidiki. It is located in the first peninsula of Halkidiki, Kassandra. Kallithea is 85 km away from Thessaloniki and it is the most cosmopolitan place in Halkidiki. If you cross the center of the village you can visit the beaches of Kallithea and other villages of Eastern Kassandra such as Pefkohori, Hanioti, Polichrono, Kriopigi and Paliouri, or some parts of Western Kassandrasuch as Fourka, Posidi and Agia Paraskevi. The center of Kallithea is the crossroad that leads to these two directions. Afitos is nearby, so you can go there for an afternoon walk there.

Afitos or Athitos is a traditional village in Kassandra Halkidiki which is located 83 km away from Thessaloniki. It has an amazing view of Toroneos gulf as the village is built on a hill above the coast. Most houses are built of stone with an excellent architecture. Small squares, cobbled streets and traditional taverns create a beautiful scenery totally harmonized with the natural landscape. Visitors also have the opportunity to admire the unique architecture of the church of St. Demetrius which was built in 1859 and it is located in the central square and also mansions and the famous sculptures of Vassilis Pavlis. In the village center you will find the folklore museum which houses various art exhibitions such as tools and utensils used in the past by local residents.

Kriopigi in Kassandra in Halkidiki is a seaside village which is built on a hill full of pine trees over Toroneos Gulf. It’s located 80 km away from Thessaloniki airport and lies on the east side of the peninsula of Kassandra; you will find it right after Kallithea. The area has heavy tourist traffic during the summer and in its center there are traditional old houses which coexist with large hotel complexes.

Neos Marmaras is the largest seaside village in the second peninsula of Halkidiki, Sithonia. It is the most cosmopolitan place in Sithonia and every year thousands of tourists visit and are enjoying the beautiful beaches, the beautiful scenery, the nature of the surrounding mountains, the nightlife and the romantic walks on the streets with a view of the small island Kelifos, the first peninsula of Halkidiki, and the mountain of Gods, Olympus.

Vourvourou is a tourist resort which is located in the northeastern part of Sithonia in Halkidiki and is 103 km from the Macedonia Airport in Thessaloniki. It is a settlement with several cottages and accommodations, harmonized with the unique beauty of the region which is flanked by lands with pine trees and exotic beaches with blue-green water. It is a destination that you should definitely visit during your holidays in Halkidiki. The settlement is developed along the beach, opposite from a cluster of nine islands, with the biggest of them called Diaporo. It has magnificent beaches. All beaches in the area are unique, with sandy coasts and calm water. The most famous of these are Karidi Beach with pine trees that almost reach the waves of the sea, the beach Livari and beach of Mpara.

Nikiti is a coastal town in Sithonia, Halkidiki. It is 105 km away from Thessaloniki and 36 km away from Polygyros. This small town has many natural beauties and a long coastlines. During the summer, it is flushed out by Greek and foreign tourists who either reside in the city or visit to swim in the beautiful beach and have fun in the shops.

The Holy Mountain. This peninsula has been declared a world heritage site by UNESCO. It hosts many monasteries on its green rugged slopes which are home to about 2000 monks. Women are NOT allowed to enter Mount Athos and men MUST apply for a permit months before their visit this place. Even when the permission is granted men can only stay up to 4 days. Though women and men without a permit can get into excursion boats which sail around Mount Athos, and by this way to have the opportunity to view the monasteries and other sights from a distance. Special events such as conferences, lectures and exhibitions are organized in order to promote religious and charitable work.

Nea Roda is a coastal settlement built at the beginning of the third peninsula of Halkidiki. It’s located at the narrowest point of the peninsula and the sea hits the land on both sides. Nea Roda is known from history since here Xerxes in 480 BC opened a canal in order to pass the fleet and at the same time to avoid sailing arround Athos, as the last time he tried to do so his fleet was sunk.

Ouranoupoli is the last village you will meet in Halkidiki before the Mount Athos. Here starts the ferry boat to Daphne, the port of Mount Athos. It is 130 km away from Thessaloniki and it has 1000 inhabitants. In the area of Ouranoupoli you can enjoy swimming in the crystal clear beaches with the golden sand. In Ouranoupoli there are large hotel complexes since many people visit Mount Athos and find the opportunity to combine their visit to Mount Athos with their summer vacations. Besides women are not allowed to enter Aghion Oros, so many men leave their family to hotels at Ouranoupoli in order to visit Mount Athos for a few days.

The Halkidiki road network is generally very good and resorts can be reached easily by car and bus. There are car rental agencies at Thessaloniki Airport and in Thessaloniki itself. The distance to Kassandra is about 78km and it takes about 90 minutes to drive there.

The port of Thessaloniki is easily reached from the city centre. Ferries from Thessaloniki leave regularly for the Sporades islands (Skiathos, Skopelos, Alonissos, Skyros), to some of the Cyclades islands ( Tinos, Mykonos, Syros, Paros, Naxos, Santorini, Limnos, Mytilene, Chios) to several Dodecanese islands (Rhodes, Kos, Kalymnos, Leros, Patmos) and to mainland ports at Pilion, Volos and Piraeus (Athens) as well as to Heraklion in Crete. NEL Lines is the main ferry company operating out of Thessaloniki with twice weekly sailings to Lesbos, Limnos, Chios and Samos.

Most holidaymakers fly in to Thessaloniki on package tours and are then bussed out by holiday firms to the various resorts located on the three Halkidiki peninsulas. Independent travellers can reach all parts of Halkidiki - Kassandra, Sithonia and Athos - by bus from both Athens and from Thessaloniki. Thessaloniki Airport (SKG) is the third biggest in Greece and handles around 4 million passengers annually. The airport is located about 14 kilometres from Thessaloniki city centre.

Buses for Halkidiki are not in the main Thessaloniki station but located in the eastern part of the city. Buses leave from the KTEL bus station about every hour from 5.40am to 9pm with services more frequent in the summer.