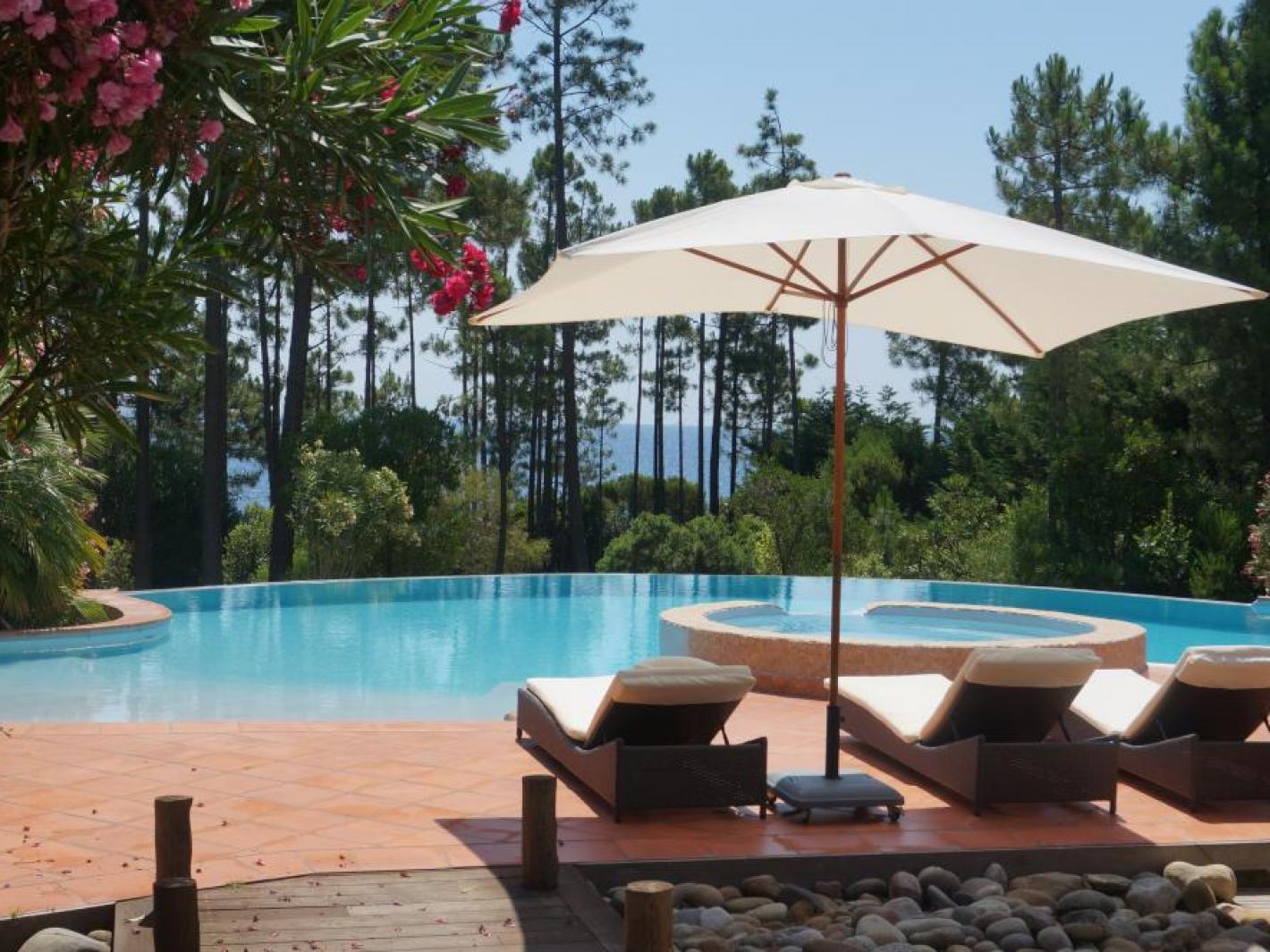 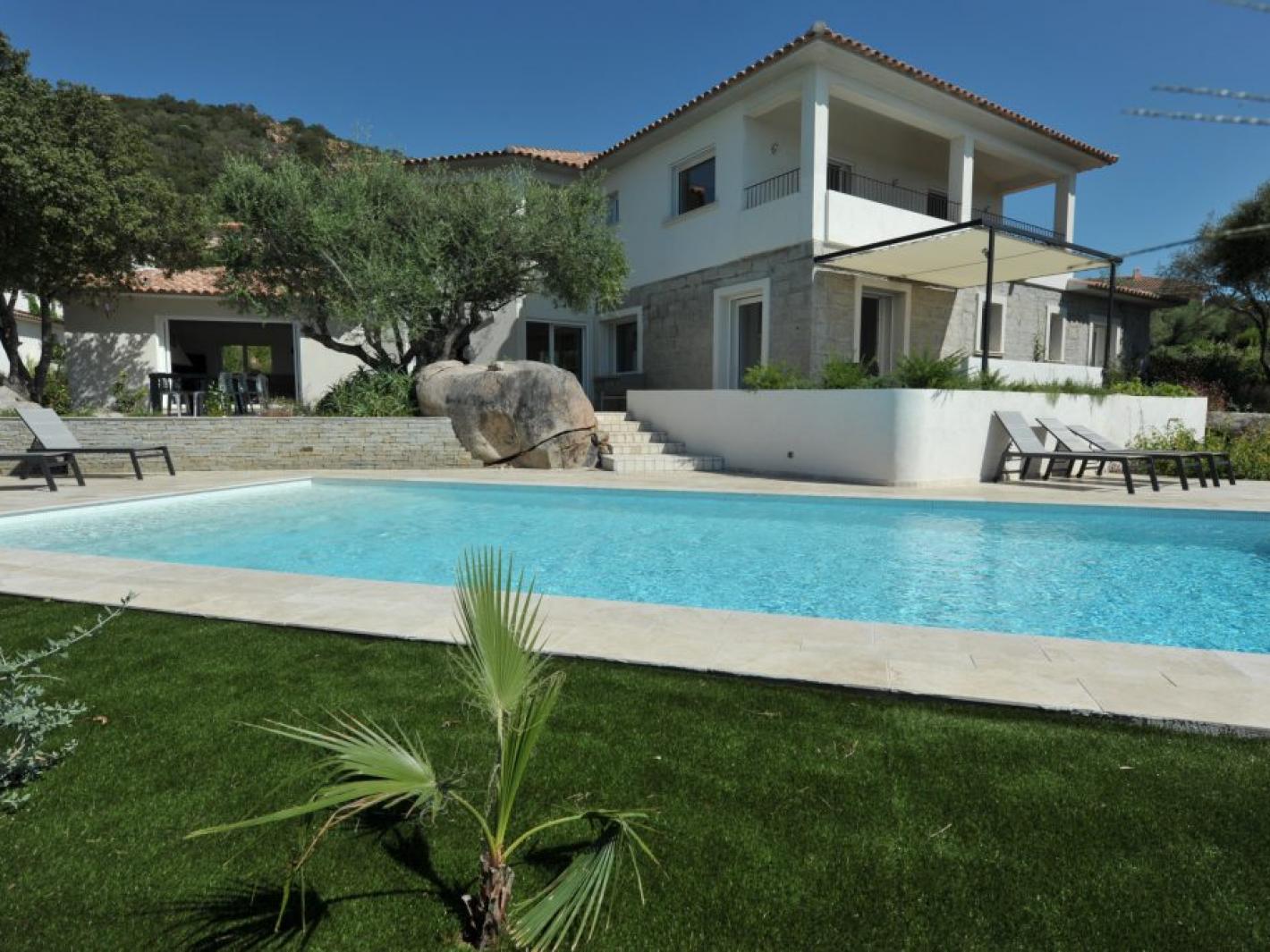 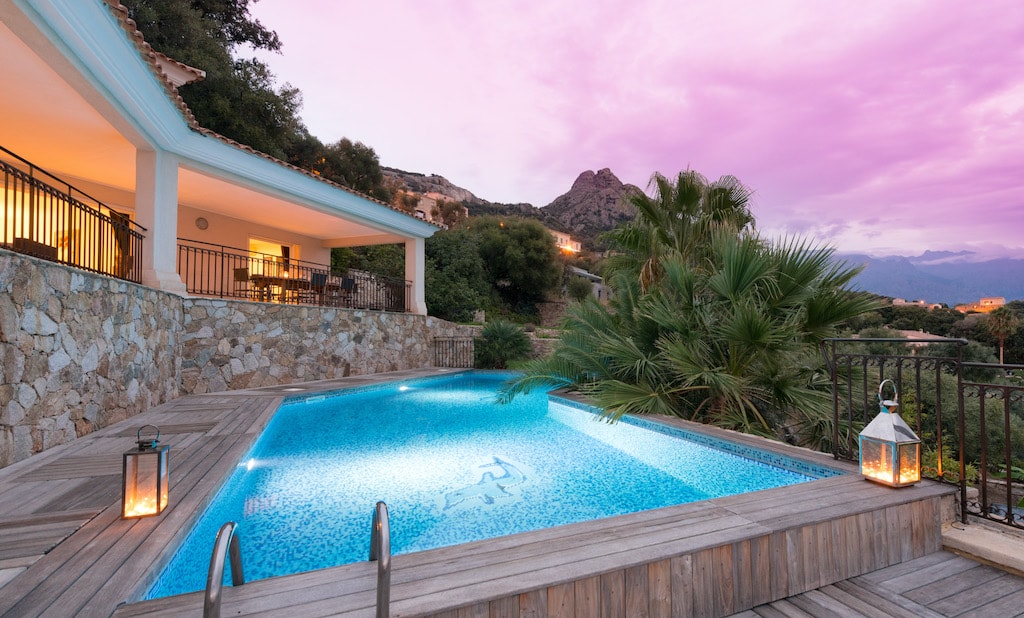 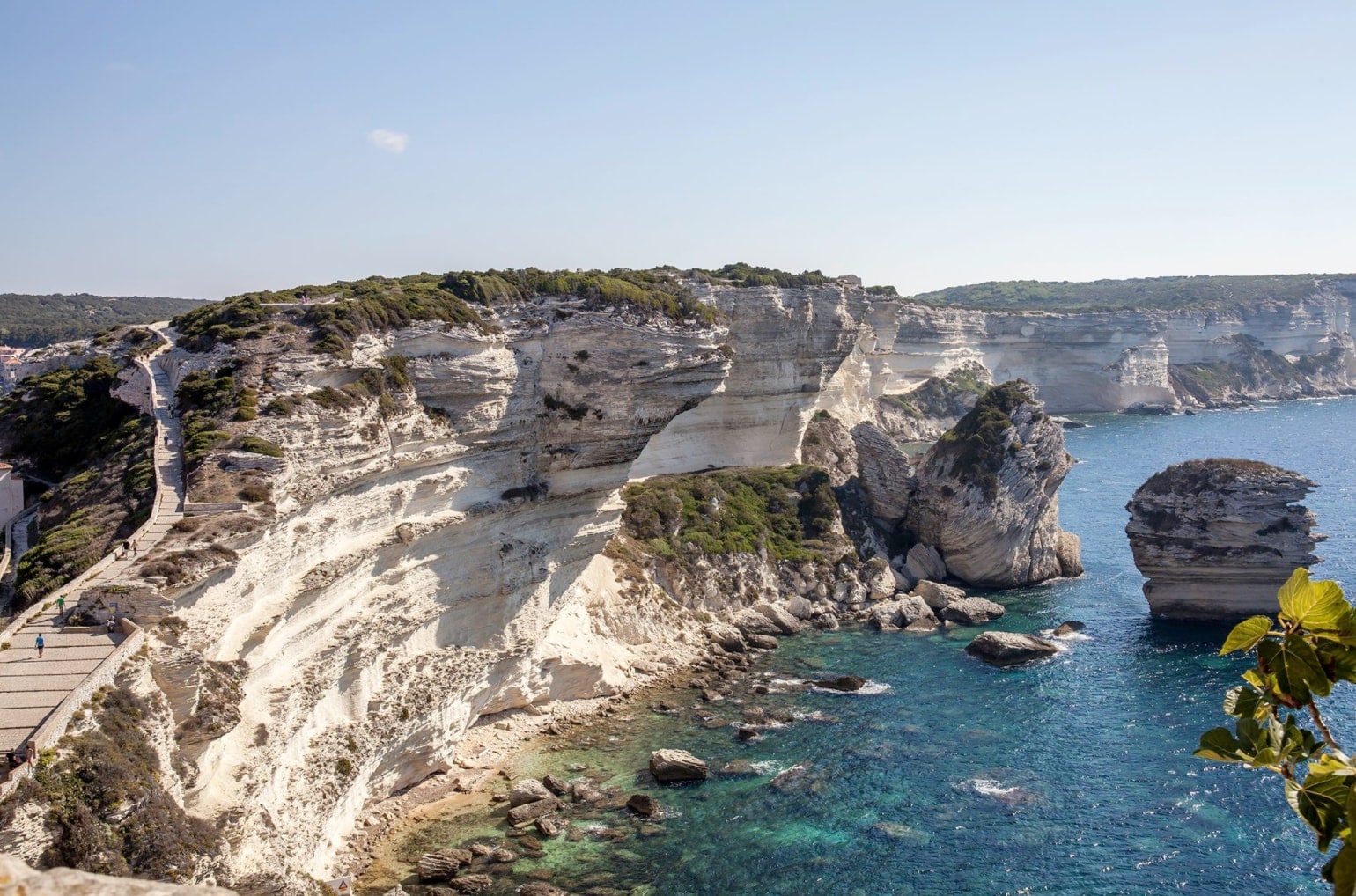 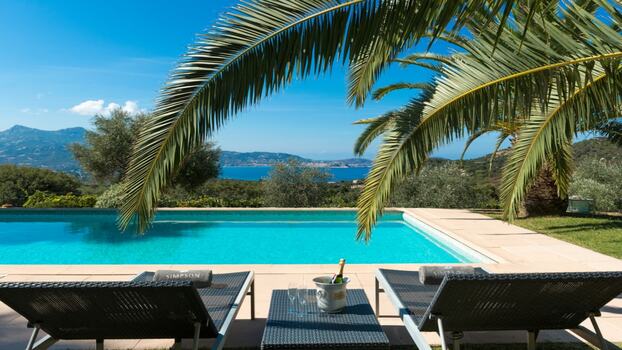 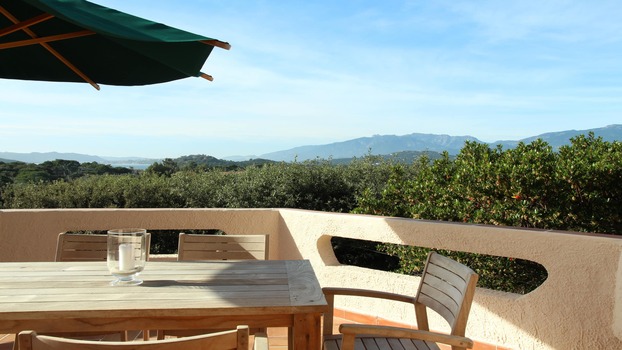 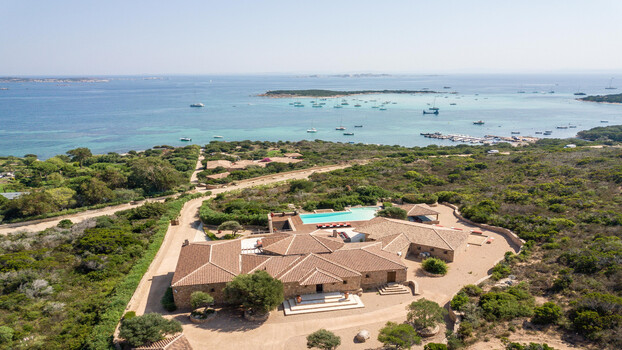 BLUE SAPPHIRE VILLA ON
THE BAY OF PIANTARELLA

Corsica features a wide range of attractions and activities, as well as opportunities to discover the unique character of the island. Jutting out from the warm waters of the Mediterranean Sea between France and Italy, Corsica is famed throughout Europe for its stunning scenery.

Corsica is popular for both its mountainous central area and stunning white sand beaches lapped by turquoise waters. From its largest cities such as Bastia to its small and remote villages like Vizzavona, there’s a lot to experience in Corsica. Check out below what you should not miss if you come by this lovely island.

Whether opting for a beachfront restaurant or a brasserie in a hilltop village, Corsica has many restaurants to tempt visitors.Steeped in tradition, full of flavour and proudly local, Corsican cuisine draws on both French and Italian influences but has its own very distinct character.

Corsica’s mountainous interior is key to understanding the island’s culinary predilections. Green pastures provide the ideal environment for rearing sheep, forested hillsides rustle with free-range pigs and wild boar, attracted by an unending supply of flavour-giving chestnuts, trout delight in the clean-water rivers, bees thrive on a multitude of flowers, and mushrooms offer up an autumnal bounty to rival prodigal spring.

Things to do at Corsica

Now for the fun part, our tips on what to do in Corsica

Spend your holiday on some of the most beautiful beaches in Corsica. Porto-Vecchio is a great destination for a holiday on the beach in Corsica. Located on the southeast coast of the island, this small town is reputed for its stunning beaches such as Palombaggia and Tamaricciu. From the 16th century Old Town that overlooks the marina to the many boutiques, bars and restaurants found along the narrow streets of this quaint Mediterranean town

Suntan at one of the loveliest ‘secret beaches’ in Corsica. Located on the southeast coast of Corsica, 5 km from downtown Bonifacio, Petit Sperone is considered one of the most picturesque beaches in Corsica. Getting there is not that easy as the parking lot is a good 15 minutes’ walk away, but Petit Sperone is worth the effort. The beach is about 90 metres long, fitted into a square-shaped bay. There are no facilities on the beach, just a snack-bar in the parking lot. In case it’s too busy, especially in summer, you can carry on walking southward another 15 minutes to reach Grand Sperone Beach.

Challenge yourself with a tough hike in Corsica. The GR20 is a trekking route that goes diagonally through Corsica, from Calenzana in the northwest to Conca in the southeast. Covering a total distance of 180 km, it’s considered one of the toughest trails in Europe. Along the route, you’ll find refuges at a day's trek from each other. It takes 15 days to hike the whole trail and you can end or start your trek from Vizzavona, a village located in the middle of the GR20. The northern part of the trail is the most challenging.

Hike through pine trees forest and rocky paths. Located in southern Corsica, a few kilometres northeast of Zonza village, the Aiguilles de Bavella (Bavella Needles) are rocky spikes of red granite that overlook the Bavella Hills. The easiest way to see these needles is to follow one of the many hiking trails that depart from the Col of Bavella on the D268 Road. The famous GR20 trail passes the foot of the Bavella Needles on the way to its southern end in Conca.

Go island hopping from Bonifacio. Lying 4 km off the southeast coast of Corsica, the Lavezzi Archipelago is a group of small granite islands. Located in the strait of Bonifacio they feature splendid reefs that make them prime snorkelling and scuba diving destinations. You can easily get to Lavezzu Island on one of the shuttle boats that depart from Bonifacio and Porto-Vecchio. On Lavezzu, there's a 3-hour hiking trail that offers splendid views and photo opps.

Roam around historical surroundings. Located toward the northeastern tip of Corsica, Bastia is the main commercial town of the island. It’s also the main port, with a ferry terminal offering routes to France and Italy. Bastia’s Old Port is located just south of the ferry pier. It’s a great place to wander around as it has a quaint and timeless feel. Pick a table at one of the outdoor terraces overlooking the sea and just take a break, watching people passing by while sipping a glass of pastis or Corsican wine. Taking life slow is typically Mediterranean, and there’s no better place to do it than at Bastia’s Old Port.

Go snorkelling, scuba diving, sailing or sea kayaking in Corsica. It may sound obvious, but Corsica is one of the greatest parts of France to enjoy water sports. The waters that surround the island are swimmable from May to October, ranging from 19°C to 24°C. The many nature reserves that surround the island offer world-class diving and snorkelling sites; for instance, La Revellata at the edge of Scandola Nature Reserve, or Palombaggia Beach and the Lavezzi Archipelago to the southeast of the island. Sea kayakers also enjoy the exploration of all the nooks and crannies of the island’s rocky and indented coastline.

Explore a protected unique coastal area. Scandola Nature Reserve is a UNESCO Natural World Heritage Site that sits 15 km north of Porto, on the west coast of Corsica. Covering an area of almost 20 sq km, of which half is land and the other half sea, it features a jagged coastline made of red porphyry, rhyolite and basalt. Daily boat trips depart from Calvi and Ajaccio to visit this beautiful area. You’ll explore the largest cracks in the cliffs, stop by tiny hidden beaches, and swim with the fish that live in this protected area.

The island is only 80 kms from the Italian coastline and 140 from the French coast, so going by ferry is a good option since you can bring your own car. It is also a really nice way to go to Corsica for the first time. Falling asleep after leaving a French or Italian harbor and waking up at dawn to the spectacle of the island’s mountains rising above the sea is a wonderful experience. When you arrive by ferry, you have time to get a good view of the island, to approach it slowly, distinguishing more and more details of the landscape before you set foot in the harbor. The main harbors on the island are Bastia, Ajaccio, Calvi, l’Ile Rousse, and Propriano.

Corsica is a road trip paradise. But with high mountains on such a small territory, lots of roads are sinuous. Where to rent a car in Corsica You can rent a car
● upon arrival at the airports
● and at ferry wharfs
● or from all major town centers.
Most major international brands are available in Corsica. However, it is an island so not all are present. And those are small airports with limited staff. So at each plane arrival, you will have to queue a little to get your car. Be patient!
TIP​- In any case, if traveling during Summer or school holidays, always book your car early!