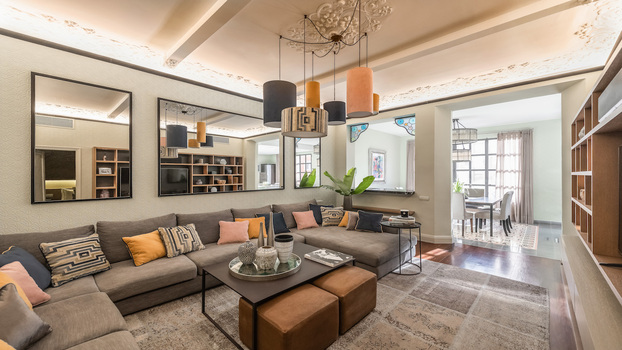 Barcelona is an enchanting seaside city with boundless culture, fabled architecture and a world-class drinking and dining scene.

Architecture of the Ages

Barcelona's architectural treasures span 2000-plus years. Towering temple columns, ancient city walls and subterranean stone corridors provide a window into Roman-era Barcino. Fast forward a thousand years or so to the Middle Ages by taking a stroll through the shadowy lanes of the Gothic quarter, past tranquil plazas and soaring 14th-century cathedrals. In other parts of town bloom the sculptural masterpieces of Modernisme, a mix of ingenious and whimsical creations by Gaudí and his Catalan architectural contemporaries. Barcelona has also long inspired artists, including Pablo Picasso and Joan Miró, both of whom have major Barcelona museums devoted to their works.

The night holds limitless possibilities in Barcelona. Start with sunset drinks on a panoramic terrace or dig your heels in the sand at a rustic beachside chiringuito (temporary snack bar). As darkness falls, live music transforms the city: the rapid-fire rhythms of flamenco, brassy jazz spilling out of basements, and hands-in-the-air indie-rock at vintage concert halls. Towards midnight the bars fill. Take your pick from old-school taverns adorned with 19th-century murals, plush lounges in lamp-lit medieval chambers or boisterous cava bars. If you're still standing at 3am, hit the clubs and explore Barcelona's unabashed wild side.

Barcelona is one of Europe’s most popular cities, and with good reason. The historic capital of Catalonia is packed with galleries, museums, historical attractions and places to eat. Set between the mountains and sea, it’s a buzzing and vibrant city, celebrated for its unique architecture, famous artists and city beaches. If you only have a few days in the city, here are some of Barcelona’s top highlights.

Almost every city has at least one landmark that you simply can’t miss, and the Sagrada Família is Barcelona’s. Antoni Gaudí’s magnificent masterpiece has been in construction for more than 130 years, but it’s still not finished. Far from a building site however, the church features two grand facades studded with intricate stone carvings, towers which gleam with gem-like tiles, and an interior filled with tree-like columns which soar up toward the canopy ceiling. The building is expected to be completed in time for the 100th anniversary of Gaudi’s death in 2026.

While the Sagrada Família may be the most famous of Gaudí’s buildings, all of his wonderful whimsical designs are worth a visit. The most well-known are Casa Batlló with its iridescent dragon-like scales and skull and bone-like balconies, and La Pedrera with its undulating stone façade and fanciful chimneys. Some of his lesser-known, but equally beautiful buildings include Casa Vicens, the first house he ever designed; Palau Güell, which he designed for his patron Eusebi Güell; and the Torre Bellesguard.

Barcelona’s Gothic Quarter is the oldest and most atmospheric part of the city. Characterised by small alleyways, hidden plazas and historic buildings, it lies to the east of La Rambla, the famous pedestrian street that runs through the centre of the old town. It’s scattered with century-old shops, small bars and cafes. Some highlights of the Gothic Quarter include Plaça Sant Jaume, home to the grand Palau de la Generalitat; the impressive Cathedral; and the striking Plaça Reial, fringed by cafes and palm trees.

Whether you visit Barcelona in summer or in winter, a visit to its beaches won’t disappoint. Even in winter, it can be sunny enough to sit outside and enjoy a meal at one of the seaside restaurants, while summer offers everything from sunbathing and swimming to water sports. The city boasts a five-kilometre stretch of coastline, home to nine different beaches. Find the one that suits you. There’s Sant Sebastià with its range of upscale restaurants, Somorrostro lined with hip nightclubs, and Nova Icaria with its water sports centre and beach volleyball.

Montjuïc is the green hill to the south of the city, home to the Olympic Park, as well as numerous museums and gardens. Rising from Plaza d’Espanya, the first sight you’ll be met with are the grand sets of stairs and fountains cascading down the from the magnificent palace housing the Museu Nacional d'Art de Catalunya (MNAC). Behind this lies the huge Olympic stadium and the rest of the Olympic Park. Other sights on the hill include the Fundació Joan Miró, the museum of the famous Catalan artist; the Jardí Botànic de Barcelona (Botanical Gardens) and the Castell de Montjuïc (Montjuïc Castle).

Barcelona-El Prat international airport has the second highest volume of air traffic of all Spanish airports. It has two large passenger terminals, T1 and T2 , from where around a hundred airlines offer direct flights all over Europe. Intercontinental flights usually stop over Madrid or other European capitals but there are also direct connections with various cities round the world. There are also three smaller airports near Barcelona: Girona-Costa Brava, Reus and Lleida-Alguaire.

Barcelona has rail links with various places in Europe and all of Spain. The AVE high-speed network also connects Barcelona with the French cities of Paris, Lyon, Toulouse and Marseilles, as well as Madrid and the south of Spain. And the suburban train networks link the Catalan capital with the main Catalan towns and cities.

Barcelona has an extensive road and motorway network linking it to Catalonia and the rest of Spain. The border with France is only 150 kilometres away. It is also possible to travel by car to North Africa via Algeciras, where you have to take a ferry. You can get into the city from the two ring roads, the Ronda del Litoral and the Ronda de Dalt, or take the Avinguda Meridiana right into the centre. If you are coming from the rest of Spain and approaching from the south, take the AP-7 or C-32.

Barcelona has the largest cruise ship port in the Mediterranean basin, with seven terminals. It also has nine passenger terminals and four ferry terminals. It links to the Balearic Islands and the main Mediterranean ports. Along the city's coastline are also four marinas with everything you need for mooring private boats.